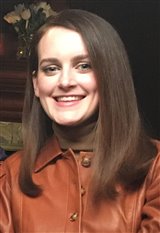 Sophie McShera Date of Birth: January 1, 1985 Born in Yorkshire, England, Sophie made her professional acting debut at the age of 12, when she was cast in a British stage production of the musical The Goodbye Girl, playing the role of Lucy. She followed that up by playing the title role in a 1988 touring production of the musical Annie. Sophie went on to college at Brunel University where she finished with a degree in modern drama. Sophie landed her first television role in 2007 on the series... See All