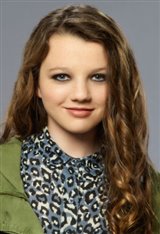 Stefania LaVie Owen was born in Miami, Florida, but moved to New Zealand when she was four. She attended a private school near Wellington and was involved in many school productions and dance classes. Stefania began acting professionally when she was cast in Peter Jackson’s supernatural drama The Lovely Bones (2009) as Flora Hernandez. She acted alongside a star-studded lineup that included Mark Wahlberg, Rachel Weisz, Stanley Tucci, and Saorise Ronan. After The Lovely Bones, Stefania landed a... See All