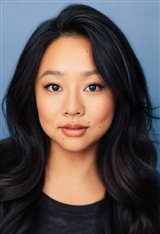 Born in Torrance, California to a single mother, Stephanie Hsu moved to New York City after graduating from high school to study at NYU Tisch School of the Arts, graduating in 2012. She played a number of roles in short films, TV series and indie films before landing a regular role as Joy Armstrong on the Hulu series The Path in 2016. The show enjoyed three seasons and after it ended, Stephanie made her Broadway debut in The SpongeBob Musical in 2017, playing Karen, the anthropomorphic... See All