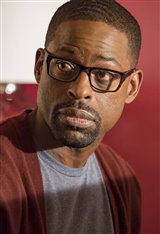 Sterling K. Brown was born in St. Louis, Missouri, one of five children, and went by his middle name, Kelby, for most of his childhood until he turned 16. His father died when Sterling was 10, a devastating moment he would later channel into his break-out performance on the TV series This is Us. Sterling knew acting was his calling when he was a freshman in high school and performed in the musical Godspell. After three nights of standing ovations, Sterling – who had previously devoted all his... See All