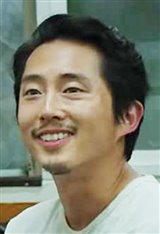 Steven Yeun is a Korean-American actor best known for playing Glenn Rhee on The Walking Dead (2010-2016). Born in Seoul, South Korea, Steven Yeun was originally named Yeun Sang-yeop at birth. He was raised by his two parents and alongside his younger brother, Brian Yeun. He and his family immigrated to Regina, Saskatchewan in 1988 and later moved to Taylor, Michigan, where he would stay until he graduated high school. He graduated from Kalamazoo College in 2005, receiving a bachelor's degree... See All