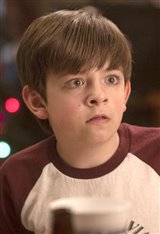 Winslow Fegley was born in Allentown, Pennsylvania. He is the son of fellow actors Michael Fegley and Merce Tonne and brother to actors August Fegley and Oakes Fegley. He began acting at five, doing voice work for local radio commercials. At six, Winslow appeared at the Civic Theatre of Allentown as young Ebenezer in a production of A Christmas Carol. Then, he starred alongside his father in a stage production of A Billion Nights on Earth at the Buntport Theatre. In 2019 he appeared as Mel on... See All