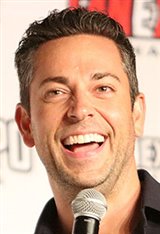 ZACHARY LEVI Date of Birth: September 29, 1980 Born in Lake Charles, Louisiana, Zachary Levi grew up all over the country before his family put down roots in Ventura County, California. At the early age of six, Zachary began acting, singing and dancing in school and local theater productions. Levi began acting onstage in community and regional theater when he was just a kid, but it was a very grown-up performance in 1991 as Hank in the play Marvin's Room that booked him an agent. His first big... See All