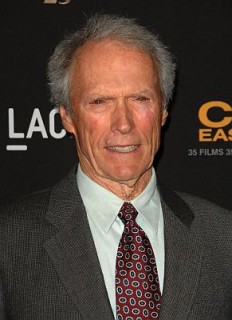 It's been twenty years since legendary filmmaker and actor Clint Eastwood premiered, "White Hunter Black Heart" at the Toronto International film festival.  He has finally returned, with his latest offering, "Hereafter" that stars Matt Damon as a blue-collar worker with a special connection to the afterlife. Three parallel storylines unfold in London, San Francisco and France, all involving characters who have lost loved ones or had brushes with death.  Eastwood who recently turned 80 and Hereafter star Matt Damon sat down with Tribute's Bonnie Laufer and an exclusive group of reporters to talk about the film.

Bonnie Laufer: So Clint, I understand that in order to get Mr. Damon again, you had to rearrange schedules because he’s got so many projects on the go. Is that a true statement?

Clint Eastwood: He was busy siring children (laughs). Finally he acquiesced and he came back after Christmas and we did a few sections, but then went back to England to conclude the film.

Q: This seems like a bit of a style change for you, Clint…

Clint Eastwood: Well, I just liked the story. I liked the idea of telling three stories simultaneously. I guess it is like some of those French films where at the conclusion the people all come together…

Q: Matt, how does he get such concise performances out of actors?

Matt Damon: Well he is an actor, so he knows a lot about acting and gives the kind of direction that he would want as an actor. He’s been acting longer than…

Matt Damon: (laughs) I was just going to say usually than most of the actors that he’s working with, so he’s got a lot of knowledge about what’s helpful and what’s not helpful, and the kind of environment to create. And then obviously as a director for 40 years, he knows what kind of environment is great for his crew and knows a lot about everybody’s job and how to make it easier on everybody. And as a result, everybody really feels like they get to do their best work—and in a really fun atmosphere, too.

Q: You don’t dwell on things, I understand… Clint Eastwood likes to move things along?

Matt Damon: Yeah, and that’s good. I think you can fall into a trap with second guessing yourself and fiddling with something forever, and never pulling the trigger and moving on. So much of directing seems to be that ability to be decisive and keep the train headed somewhere, anywhere, and not just stop and tinker until everybody goes crazy.

Q:  Were there any issues  with the subject matter? Any concern that it will read the wrong way to some people?

Clint Eastwood: Not really. You just kind of do the project the way the story is, in your mind, supposed to unfold. And you can’t tailor it to any particular person; you can just tailor it to your likes and you hope that people will respond to it. 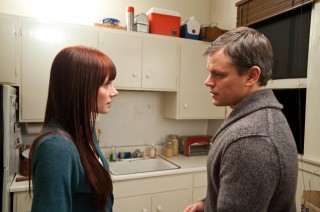 Bonnie Laufer: Matt, was there any preparation on your part, because, you know, usually when you hear about psychics, most of them are out for a quick buck and you don’t know if they’re telling the truth. But with your character in this film, that’s not what it is; it’s a gift, but he calls it a curse. Did you talk to people who say that they do this, or is it something where you went by the script?

Matt Damon: No, I really went by the script. There are some books that I’d read by people who’ve had near-death experiences. But the script was really tight and really well done. Peter Morgan’s a playwright and it feels like doing a play, you know, where every answer you need to get is already there. There wasn’t any point where we looked at each other and said, “I don’t know what he was thinking with this scene.” It all made sense and fit together really nicely.

Q: Clint, you mentioned that everyone has their own take on the afterlife.  What  is yours ?

Clint Eastwood: Well, I’ve talked to people who’ve claimed to have had a near death experience and they paint a similar picture. But I don’t know—I haven’t been there and I don’t intend to go there before my time [laughs]. You just think of what it must be like and you have to do it in your imagination. Does it exist? I don’t know.

Q: The tsunami sequence, was that difficult to shoot?

Clint Eastwood: That was the thing that I liked about the material to begin with. Peter Morgan took incidents that really happened—the tsunami, the London bombings, all of these true events—and incorporated them into the story. I thought that was rather clever.

Q: What took you so long to come back to TIFF?

Clint Eastwood: Everything is just sort of, whatever the timing was. This was the first appearance that I’ve made since A Fistful of Dollars, 46 years ago [laugh]. But no particular reason except that the festival is well thought of, people will come here to enjoy it. And it seemed like the thing to do.

Q: Why Matt Damon? What is it about Matt that makes you want to continue working with him?

Clint Eastwood: At first, I didn’t think of using Matt Damon because he had other conflicts. And then finally it came to a slight conclusion in my brain that we were doing three stories, so why not just do two stories and then do Matt’s story when he’s available? So we did that—we did the first two-thirds and then took a hiatus, and then when Matt was available we started his sequence, then went back to England to do the conclusion of the film.

Clint Eastwood: In this MTV generation that we live in, something that I still like to embrace is that we actually unfold the stories and get to know the people and get to know a little more detail about them. Rather than play to the common denominator of a lack of attention span that sometimes people feel goes on nowadays with the great information age that we live in where everything has to be immediate and over with. Its two hours and you sit there for two hours, and you enjoy the stories or you don’t enjoy it. If your attention span doesn’t have it in you, then you should be watching something else.

Q: The child stars were amazing, how did you find them?

Clint Eastwood: With the kids, you get the usual kind of child actors, mimicking their adult trainers. We took two that were the least experienced, but they had great faces and they came from a working-class neighborhood in England that was kind of on the rough side. And they just really wanted to do it. It wasn’t as easy as working with the actors that were all professionals, but at the same token, they had a natural kind of way. Sometimes they’d give you absolutely pure gold, and other times you’d have to wring it out of them. [laughs]

Q: The children were amazing, how did you find them?

Clint Eastwood: With the kids, you get the usual kind of child actors, mimicking their adult trainers. We took two that were the least experienced, but they had great faces and they came from a working-class neighborhood in England that was kind of on the rough side. And they just really wanted to do it. It wasn’t as easy as working with the actors that were all professionals, but at the same token, they had a natural kind of way. Sometimes they’d give you absolutely pure gold, and other times you’d have to wring it out of them. [laughs]

Bonnie Laufer: You did such a wonderful job on-screen in Gran Torino, we didn’t see you in Invictus, and you didn’t appear in “Hereafter.” I hope you’re not going to give up being  in front of the camera.  Are you going to come back?

Q: What are you working on now that’s exciting?

Clint Eastwood: Well, we just finished this one, Hereafter, and I’m just kind of sitting tight. Gran Torino was the last—not the last acting role, but maybe the last acting role. If a great script comes along, I would entertain that, but so far there isn’t one and I’m not looking for it. But directorally, I’m doing this and I’m delving now into a story about J. Edgar Hoover.

Clint Eastwood: He actually approached us on it. He’s very interested in doing it, so that may come about. We haven’t really gotten into that yet. The reason this one has taken longer than normal in post-production—we had it edited in one week—is because of the tsunami. Water is the hardest thing to do in the world in a CGI format. That had to be a really a convincing sequence, because it’s a key sequence. It just took time.

Q: What have you learned from Clint, Matt?

Matt Damon: Oh man, too numerous to count. TNTC. [laugh] The great thing about making movies is that you really can’t perfect it. It’s just really fun, because you learn something every single time out. Whether you’re working with a great director or you’re working with a schmo and learning what not to do [laugh]. Every movie is different—the problems are different, the solutions are different. It’s just kind of fun. You go every day and you’re with this group of people—and Clint put together a great group—and the problems you have to solve are different. You kind of figure your way through the day and get excited over things that go really well, and he gets you home at a reasonable hour.

Bonnie Laufer: Matt you have so much stuff coming up, do you ever get time to rest?

Matt Damon: I haven’t worked since May—I got the whole summer off and I’m not working ‘til December. But this job, because of the way it got set up, all my stuff got crammed together. So rather than being with the crew for a few months, it was really only a month and it was just concentrated, working every day for a month. And then I did True Grit, which was really only 25 or 26 days of shooting, which was spread out over three months. So it seems like I have a lot coming up, but they weren’t like, six-month movies, one after the other.

Bonnie Laufer: We’re going to see you on the season premiere of 30 Rock?

Matt Damon: Yes! Yeah. I love those guys. I really love that show.  I actually saw Tina Fey at an awards show and my wife and I went up to her to tell her how much we love the show. So I joked with her by saying, hey if you ever have apart for me…   and soon after she called me up and asked me to be in the premiere.

Q: Is the Liberace project going forward with Michael Douglas?

Matt Damon: Well, yeah, it is. We’re really excited about it. He’s obviously going through his health issues, but from what I understand, it’s not going to be a problem. The numbers are very much on his side and he’s a healthy guy, so we’re all just hoping that everything goes well. We’re hoping to be right on track for shooting next summer. But obviously, we’re willing to wait for our star as long as we have to.

Q: You've come a long way from “The First Traveling Saleslady” with Carol Channing... Was that your first role?
Clint Eastwood: My first role was Revenge of the Creature from the Black Lagoon. [laughs] Jack Arnold was the director and Bill Alland was the producer. He was the guy who played the reporter in Citizen Kane.