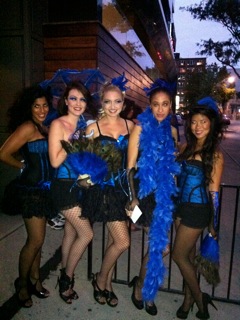 The crowd at 350 King Street West waited impatiently for the unveiling of what was one of the most impressive opening events for this year’s 2011 TIFF.  As the blue carpet rolled out, the seductive presence of ruffled burlesque models and dancers branded in royal blue opened with a hot to trot number, keeping the crowd in anticipation of what was to come of the ultimate secret tease.  Suspended mid-air was the pinnacle of the event, as an elegant silk-clad acrobat performed atop a bigger-than-life sized martini glass amidst a grand show of fireworks.

SKYY VODKA presented live entertainment at its finest.  In closing the crowd was treated to tasty, fruit-filled cocktails with the smooth taste of SKYY VODKA.  Wilde Gingers kept us Feeling Fiennes. It was an evening that could only be described as sexy, seductive and sophisticated. Thank you SKYY VODKA for being a great sponsor and for doing what you do best.