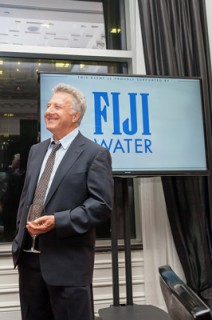 Dustin Hoffman showed off his philanthropic side last night by offering to match donations at a gala event at Toronto's Trump Hotel, honoring his new film Boychoir, which premiered at TIFF the same night. Dustin made the announcement after hearing that the event host, Creative Coalition, was an arts advocacy organization for arts education and anti-bullying. "I will match the donations of every person that donated tonight," Dustin told an appreciative audience.

Joining Dustin at the event were co-stars Eddie Izzard, Josh Lucas, director François Girard and Glee's Kevin McHale, who also attended the red carpet premiere. Eddie made waves of his own at the event, jokingly suggesting that awards should be judged on their ability to be used as weapons. At least, we hope he was joking.

Meanwhile, Kevin braved the rain to return to the premiere stage after the screening. There's no word yet on how much money was raised at the event, which was presented by AMC. Hoffman will have to wait to see how much he'll be giving. ~Kelly Townsend