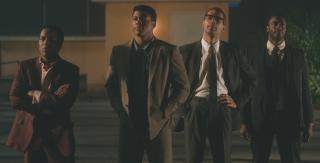 As TIFF winds down, some promising titles are back at the TIFF Bell Lightbox and other drive-ins. Two stand-out films at TIFF, Regina King's One Night in Miami... and Pieces of a Woman are both playing today.

Regina King's directorial debut, One Night in Miami…, based on Kemp Powers’ 2013 play, is a fictionalized account of a 1964 meeting between Malcolm X, Muhammad Ali, Sam Cooke and Jim Brown. The film screens at 4:30 pm at TIFF Bell Lightbox.

Pieces of a Woman stars Vanessa Kirby and Shia LaBeouf as a couple reeling from tragedy in the new film from Kornél Mundruczó. The movie screens at 6 pm at Visa Skyline Drive-In at CityView.

Mexican director Michel Franco's latest film New Order is a timely indictment of class divide and abuse of power, set amid both a street protest and a ritzy wedding. The film screens at 9:15 pm at TIFF Bell Lightbox.

Wildfire, Cathy Brady’s debut, is an emotionally stirring exploration of two sisters — and a country — struggling to emerge from a traumatic past. The film screens at 9 pm at West Island Open Air Cinema at Ontario Place.

Fauna, the latest feature from Mexican-Canadian auteur Nicolás Pereda is a comedic take on how violence in Mexico has infiltrated popular imagination. This screens 9:15 pm at TIFF Bell Lightbox.

The movie Limbo follows a Syrian asylum-seeker who finds himself in a purgatorial state on a remote Scottish island. It screens 9 pm at TIFF Bell Lightbox.

True Mothers, the latest from acclaimed director Naomi Kawase, is a touching family story of love and adoption. This screens at 3:45 pm and 4 pm at TIFF Bell Lightbox.

In 180° Rule, a school teacher from Tehran is preparing to attend a wedding in northern Iran. When her husband suddenly forbids her to go, she makes a choice that will place her on a painful path to atonement. This plays 12 pm at TIFF Bell Lightbox.

Canadian documentary The New Corporation: The Unfortunately Necessary Sequel, the sequel to The Corporation, exposes how companies are desperately rebranding as socially responsible — and how that threatens democratic freedoms. It screens at 11:30 am at West Island Open Air Cinema at Ontario Place.

Also screening today online at 6 pm at Bell Digital Cinema are The New Corporation: The Unfortunately Necessary Sequel, The Best is Yet to Come, David Byrne's American Utopia, I Am Greta, New Order and Pieces of a Woman and the TV series Trickster.

One Night in Miami, Pieces of a Woman, tiff, TIFF 2020, Trickster, True Mother