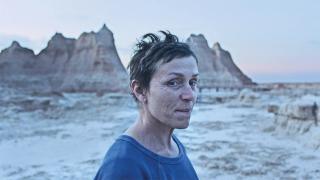 Over the past eight years, every TIFF People's Choice Award winner has gone on to be nominated for Best Picture at the Oscars. Nomadland also won the Golden Lion at this year's Venice Film Festival. This is the first time in history that a film has won the top prizes at both festivals.

The first runner up was Regina King's One Night in Miami... and the second runner up was Beans, directed by Tracey Deer. The TIFF 2020 People’s Choice Documentary Award winner went to Michelle Latimer's Inconvenient Indian. The TIFF 2020 People’s Choice Midnight Madness Award was nabbed by Shadow in the Cloud, directed by Roseanne Liang. All winners of the top prizes this year were women filmmakers.

The 2020 Changemaker Award was given to Black Bodies, a short film by Kelly Fyffe-Marshall. The three Amplify Voices Awards presented by Canada Goose winners are:

Cameron Bailey, TIFF Artistic Director and Co-Head, announced in a press statement: “TIFF 2020 was a year we won’t soon forget. Over the last 10 days, we have experienced community in the truest sense. The pandemic hit TIFF hard and we responded by going back to our original inspiration — to bring the very best in film to the broadest possible audience and transform the way people see the world through film.

"We heeded the urgent calls for greater representation of under-represented voices. And we watched as audiences embraced cinema’s ability to transport them through screens of all sizes by joining us online from all over this country — something that we would never have seen in previous years. TIFF delivered on its promise to provide Festival-goers and the industry with impactful programming. We are very proud of what the TIFF team accomplished."