The gala premiere screening of Dear Evan Hansen was held last night, with an appreciative (and socially distanced) crowd in attendance.

After a standing ovation, they returned to the stage, while cast members Kaitlyn Dever (Zoe Murphy) and Amy Adams (Cynthia Murphy) joined virtually.

Ben and Colton, who were both in the original Broadway cast of Dear Evan Hansen, spoke of their experiences on stage and then making the transition to film. Ben was the first actor to play Evan, while Colton, who plays Connor in the movie, was the second actor to take on the lead role on Broadway.

Kaitlyn Dever and Julianne Moore spoke about making their singing debuts in a film with this project, while Danny Pino revealed that he learned a song that his character sings in the stage version, only to find out it was cut from the movie (three new songs were added). However, he added that it was a positive experience for him, because it helped him establish his character.

The entire cast, as well as the director and writer were lavish with praise for Ben Platt, whose vocals as astounding in the movie as they were on Broadway. His character suffers from extreme anxiety and goes through many emotions, but his mastery enables him to sing through all of that while giving a portrayal that will break your heart. As the cast left the stage after the talk, they received another well deserved standing ovation. ~Alexandra Heilbron 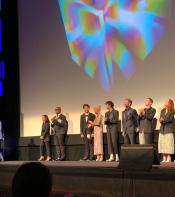 Prior to the screening Ben Platt and the cast talk about filming the movie 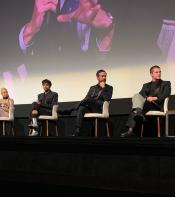 The cast listen as writer Steven Levenson talks about the film 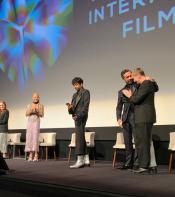 The cast prepares to leave the stage