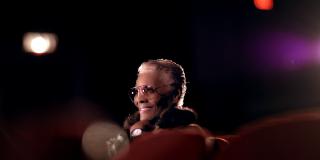 Dionne Warwick is in Toronto and will be attending the premiere of Dave Wooley and David Heilbroner’s documentary covering her six-decade career in Dionne Warwick: Don’t Make Me Over. It takes place at 2 p.m. at the Princess of Wales Theatre.

Another premium offering is the Belgium/France co-production Inexorable, a gripping thriller from Fabrice Du Welz in which long-hidden secrets and fresh desires become tangled. It screens today at TIFF Bell Lightbox at 3:30 p.m.

Benedict Cumberbatch makes his second appearance at TIFF this year in The Electrical Life of Louis Wain. It screens twice today, with a showing at the Visa Skyline Drive-In at Ontario Place at 8:30 and the official premiere taking place at Roy Thomson Hall at 9:30 p.m.

You won't want to miss Sébastien Pilote’s Maria Chapdelaine, the newest adaptation of Louis Hémon’s 1913 novel about a teen in rural Quebec who must decide her future by choosing one of three suitors. Check it out at 11 a.m. at TIFF Bell Lightbox.

Canadian film aficionados will also be interested in All My Puny Sorrows by director Michael McGowan. Based on Miriam Toews’ beloved novel about two sisters, it stars Sarah Gadon and Alison Pill. The premiere takes place at the Princess of Wales at 5:30 p.m.

Jacques Cousteau tried decades ago to warn the world about the climate crisis and it's only within the last few years that people have begun to realize how important his message was. Oscar-nominated filmmaker Liz Garbus takes a fresh look at his evolution in Becoming Cousteau, screening at 12 p.m. at Cinesphere IMAX Theatre.

Jessica Chastain and Ralph Fiennes lead a strong ensemble cast in The Forgiven, which starts at 5:30 p.m. at Roy Thomson Hall.