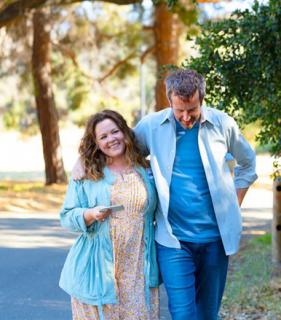 The Starling debuts at the Princess of Wales at 6 p.m. tonight. It stars Melissa McCarthy and Chris O’Dowd as a couple working their way through grief after losing their infant daughter.

Jessica Chastain stars as real life former televangelist Tammy Faye Bakker in The Eyes of Tammy Faye, a drama that details the rise and fall of the Bakker network empire. Premiering tonight at 9:30 p.m. at the Princess of Wales Theatre.

Naomi Watts stars in the thriller Lakewood from Australian director Phillip Noyce. She plays a mother who races to save her son when a shooting occurs. See it at Roy Thomson Hall at 12:30 p.m. or later tonight at the Visa Skyline Drive-In at Ontario Place at 8:30 p.m. If you haven't got time today, it also screens Tuesday September 14 at 9:00 p.m. at Ontario Place West Island Open Air Cinema.

Judi Dench, Ciarán Hinds and Jamie Dornan star in Belfast, director Kenneth Branagh’s coming-of-age story set amid the turbulent times of the late 1960s in Northern Ireland. It premieres at 5:30 p.m. at Roy Thomson Hall, then repeats on Thursday September 16 at 12:00 p.m. at TIFF Bell Lightbox.

The Norwegian/Canadian film The Middle Man is an absurdist comedy/drama about a man hired to deliver bad news in a town plagued by accidents. It stars Norwegian film actor Pål Sverre Hagen alongside a bevy of Canada's top talent, including Paul Gross, Don McKellar, Rossif Sutherland, Kenneth Welsh and Sheila McCarthy. See it at 4 p.m. at TIFF Bell Lightbox.

The Mad Women's Ball, the latest from writer-director-actor Mélanie Laurent, is a chilling tale of spectral visions and institutional abuse set in 19th-century France. The premiere is being held tonight at 9 p.m. at Roy Thomson Hall.

Other films screening today include Are You Lonesome Tonight, The Humans, The Rescue, and Benediction.

Are You Lonesome Tonight, Belfast, Benediction, Dune, Lakewood, The Eyes of Tammy Faye, The Humans, The Middle Man, The Rescue, The Starling