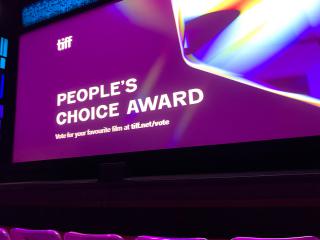 In a recorded video speech, Branagh talked about what a wonderful time he and star Jamie Dornan had at TIFF this year, adding, "I am thrilled, I am humbled and deeply grateful."

The coming-of-age drama is set during late-1960s Northern Ireland and follows young Buddy (Jude Hill), who dreams of a future that will whisk him far from the Troubles, but, in the meantime, he finds consolation in his charismatic Pa (Jamie Dornan) and Ma (Caitríona Balfe), and his spry, tale-spinning grandparents (Ciarán Hinds and Judi Dench).

The People’s Choice Award winner is based on votes, and during tonight's ceremony, it was revealed that the top three contenders were The Power of the Dog, Belfast, and Scarborough.

In addition to the People’s Choice winner, several other award recipients were announced, including:

Over the past nine years, every TIFF People's Choice Award winner has gone on to be nominated for Best Picture at the Oscars, including last year's winner, Nomadland, which won the Best Picture Oscar earlier this year.

Click here to vote on your favorite People's Choice Award winner from the past 10 years and for more TIFF coverage. ~Alexandra Heilbron