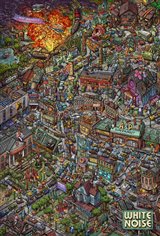 When a truck collides with a train carrying a poisonous substance, toxic clouds are formed above the town where Jack Gladney (Adam Driver) lives with his wife Babette (Chloe Sevigny) and their combined children (Raffey Cassidy, Sam Nivola, May Nivola) from various marriages.

They, along with the other citizens in the surrounding area, are asked to evacuate. Unfortunately, this causes a major traffic jam, but eventually they arrive at a camp where they're meant to stay until further notice.

At the same time, Babette's daughter Denise has noticed that her mother is taking a medication and has begun behaving strangely. She discovers the name of the drug is Dylar and asks Jack to look into it, but even the scientists and doctors he approaches have never heard of it.

Based on the book by Don DeLillo.