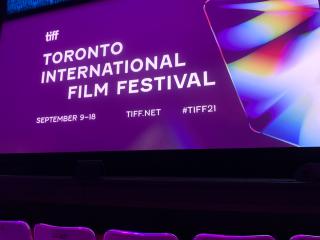 Following at Roy Thomson Hall at 9:30 p.m. is the premiere of Bergman Island, starring Tim Roth and Vicky Krieps as a couple, both filmmakers, who arrive on an island where his work is celebrated while she struggles with her screenplay.

I'm Your Man stars Dan Stevens as an English-accented, rumba-dancing robot who is assigned to serve scientist Alma Felser (Maren Eggert). It has two showings today: At 7 p.m. at Cineplex Cinemas Markham and VIP and at 7:30 p.m. at Scotiabank Theatre Toronto.

Other films screening today include Unclenching The Fists, Ali & Ava, Yuni, Memoria, Out of Sync, Drunken Birds, Vengeance is Mine All Others Pay Cash, Comala, The Falls, Ste. Anne, 7 Prisoners, Costa Brava Lebanon, and Paka (River of Blood).