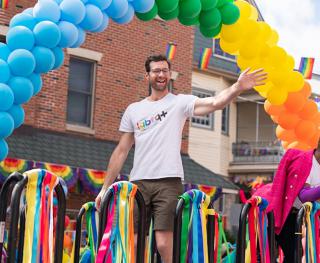 The first movies making their World Premieres at TIFF 2022 have been announced.

The film Bros will receive its world premiere at TIFF before arriving in theaters at the end of September. Billy Eichner, known for his work in The Lion King and Billy on the Street, stars in the romantic comedy. His character, Bobby Leiber, is content with being alone until he meets Aaron (Luke Macfarlane), who happens to be his complete opposite (he’s quoted comparing him to a “gay Tom Brady”).

Nicholas Stoller, the filmmaker behind the comedies Forgetting Sarah Marshall and Get Him to the Greek, directs Bros and co-wrote the screenplay with Eichner. Stoller teams up with The King of Staten Island’s Judd Apatow to produce the film. Bros is the first film featured at TIFF to star written by and star an openly gay man. It also includes an openly LGBTQ+ main cast.

The Woman King, distributed by Columbia Pictures, will also have its World Premiere at TIFF this September. The movie is inspired by the Agojie, an army of women that existed in the 19th century. General Nanisca, played by Viola Davis, must prepare her warriors for battle when their kingdom is threatened by invaders.

Another movie making its World Premiere at TIFF is On the Come Up, an adaptation of the novel of the same name. On the Come Up is considered a follow up to the novel-turned-movie The Hate U Give, both written by author Angie Thomas.

This film follows Bri, a 16-year-old aspiring rapper who becomes an internet sensation, but her image is misconstrued by the media. This marks the feature directorial debut of Sanaa Lathan. The cast includes the likes of Jamila C. Gray, Michael Anthony Cooper Jr., and Da'Vine Joy Randolph.