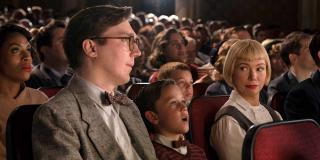 Today is the last day of TIFF 2022, and the day that the awards are announced. Steven Spielberg's biographical film The Fabelmans won the People's Choice Award, which is chosen by audience members in an online vote.

Sarah Polley’s Women Talking was the first runner up and Rian Johnson’s Glass Onion: A Knives Out Mystery was the second runner up.

Spielberg released a statement after learning that his film had won: "As I said on stage the other night, 'Above all, I’m glad I brought this film to Toronto!' This is the most personal film I’ve ever made, and the warm reception from everyone in Toronto made my first visit to TIFF so intimate and personal for me and my entire Fabelman family. Thank you to Cameron Bailey and the incredible staff at TIFF; thank you to Universal Pictures; and a very special thank you to all the movie fans in Toronto who have made this past weekend one I’ll never forget."

Special Mention for Best Feature from an Emerging BIPOC Filmmaker
Buffy Sainte-Marie: Carry It On