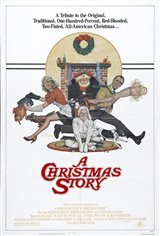 In the town of Hammond in the 1940s, Ralphie (Peter Billingsley), nine, just wants one thing for Christmas—a Red Ryder BB rifle. When he tells his mother what he wants, she replies with, "No, you'll shoot your eye out."

Ralphie fears that he'll never get the BB gun for Christmas. But there may be a surprise in store for him.

Canadian Connection: The majority of the film was shot in Ontario - in Toronto, Lindsay and St. Catharines. Several cast members are Canadian.