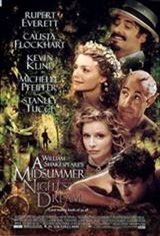 David E. Kelly is the big-time connection between two of this film's stars -- Michelle Pfeiffer and Calista Flockhart. Kelly is married to the former and writer of most of Ally McBeal in which the latter stars. Here Pfeiffer plays the fairy queen Titania while Flockhart is Helena in Shakespeare's tale of romance and magic in an enchanted forest.

It's not exactly the first time this Bard work has been filmed, nor is it numbers one through six. In fact, this is the seventh Midsummer movie and all concerned are hoping it ranks up there with the 1935 version with James Cagney that was nominated for a Best Picture Oscar.