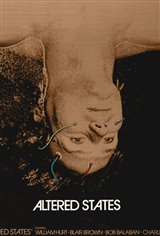 In this 1980 sci-fi horror film, William Hurt plays Eddie Jessup, a scientist obsessed with discovering mankind's true role in the universe. To this end, he submits himself to a series of mind-expanding experiments.

By enclosing himself in a sensory-deprivation chamber and taking hallucinogenic drugs, Jessup hopes to explore different levels of human consciousness, but instead is devolved into an apelike monster. Director Ken Russell helmed Altered States from a script by Paddy Chayefsky, who adapted his own novel of the same name.

Unhappy with the finished product, Chayefsky had his name replaced with his pseudonym Sydney Aaron.