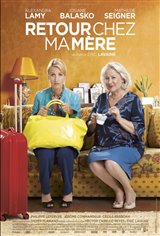 When her biggest and best customer goes bankrupt, Stephanie, in her forties, has to close her architectural firm that she founded with an old friend, and leave her apartment. While waiting to find a new job, she moves in with her mother Jacqueline. However, she doesn't know that Jacqueline, a widow of one year, is having a secret relationship with her upstairs neighbor, who happens to be an old family friend.

The excuses Jacqueline makes when she goes up to meet her new lover — without wanting her daughter to know — leaves Stephanie so confused that she believes her mother has Alzheimer's disease. Regardless, Jacqueline is eventually ready to present her new love to her children during a carefully planned dinner. But the bickering among the siblings exasperates the hostess, who dismisses everyone before she gets around to making her big revelation. Contrite, Stephanie, her brother and sister try to repair the damage.