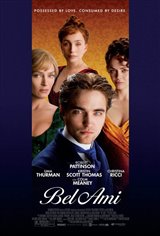 Georges Duroy (Robert Pattinson), a young man who spent three years serving his country, falls on hard times. He has no money and uses the services of prostitutes when he gets some change together. A chance meeting with a fellow soldier, Charles Forestier, who's doing well for himself, turns his life around.

Forestier gets Georges a well-paid job as a journalist. Through him, Georges is invited to social events where he meets the wives of many of Paris' most influential and wealthy men. He begins an affair with Clotilde de Marelle (Christina Ricci), whose husband is rarely around, but when he sees a chance to advance himself, he has to make a decision as to whether he wants love or power.

Based on the novel by Guy de Maupassant.