Better Nate Than Ever (Disney+) 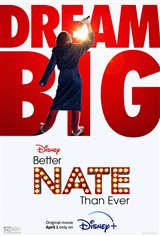 Pittsburgh native Nate Foster (Rueby Wood), 13, has always loved musicals and dreams of being in one. He auditions for the lead in the school musical, but gets a part as a tree instead. When his best friend Libby (Aria Brooks) discovers that a new musical based on the movie Lilo & Stitch is holding open auditions for children to play the roles on Broadway, Nate is thrilled, but doesn't think his parents will let him go to New York for the audition.

But when his parents leave town for a weekend away, Nate and Libby take the bus to the Big Apple for a once-in-a-lifetime opportunity to prove everyone wrong. A chance encounter with Nate’s long-lost Aunt Heidi (Lisa Kudrow) turns his journey upside-down, and together they must learn that life’s greatest adventures are only as big as your dreams.

Based on the award-winning novel by Tim Federle.