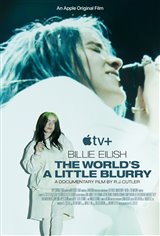 This documentary shows the now-18-year-old Billie Eilish as she tours and records her debut studio album, "When We All Fall Asleep, Where Do We Go?" She is seen alongside her brother, Finneas O'Connell, as they write and record together.

The 2019 album went on to win four Grammys, including Album of the Year, Song of the Year and Record of the Year. The 30-minute doc chronicles her life and career, including intimate behind-the-scenes footage.