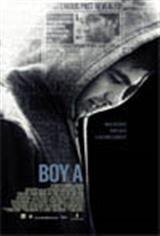 Jack has a terrible secret. He is really the notorious Boy A (Andrew Garfield) who committed a terrible crime when he was just a child. Recently released from a juvenile prison, he enters a world he has never been part of. He is haunted by his grim past, and is more a boy than a man at 24.

His caseworker Terry (Peter Mullan) sees the good in him and does everything in his power to give Boy A a second chance. Boy A chooses the name Jack and is set up with a job, a home and the opportunity for a new life.

At his job he forms adult relationships for the first time. He bonds with Chris (Shaun Evans) and finds a girlfriend in Michelle (Katie Lyons), both co-workers who witness Jack's newfound compassion and loyalty. Others are drawn to his shy, kind ways. As relationships develop, he is torn between the deceit in concealing his past and the potential exoneration by revealing his crime. Jack no longer doubts his capacity to love and has more to lose than ever. He seeks Terry's approval to confess the truth to Michelle but is implored to keep his secret for fear of his own safety.

Spending 14 years in prison has done nothing to persuade the public he's paid his dues. Accompanying his release is a widespread, media frenzy which re-ignites public indignation. The crime and trial are covered as current news and feed a hunger for revenge. Although Jack bears little resemblance to the young Boy A, it becomes increasingly clear that the past may be impossible to escape.