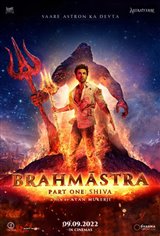 Set in modern-day India, Astras of power have been protected by a group called the Brahmānsh since Ancient Vedic times. The most powerful of these Astras, named after the most powerful weapon of the Gods, is the Brahmāstra. A mysterious dark force is trying to wake the Brahmāstra, threatening the universe we know today. Our hero Shiva (Ranbir Kapoor) journeys into this magical world of Astras where he learns of his mysterious connection to the Brahmānsh and the Brahmāstra. Shiva discovers the truth both about his own destiny as a divine hero and about the great power that dwells within him, the power of Fire.

BRAHMASTRA - the Trilogy, is a 3-part film franchise and the beginning of India's first original universe - the Astraverse. It is a new original cinematic universe inspired by deeply rooted concepts and tales in Indian mythology but set in the modern world, with epic storytelling of fantasy, adventure, good vs evil, love and hope; all told using cutting edge technology and never-seen-before visual spectacles.