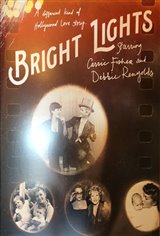 The two lived next door to each other in Beverly Hills and we see Carrie bringing food over for her mother as they eat dinner together. They discuss Debbie's failing health, Carrie's struggles with drugs and manic depression, as well as lighter topics such as their movie experiences, family ties and fame.

Debbie's poor choice of husbands is touched upon, as Carrie remembers growing up without her father, Eddie Fisher, who left the family for newly widowed Elizabeth Taylor when Carrie and her brother Todd were very small. Footage from their various movies is shown, as well as home movies.