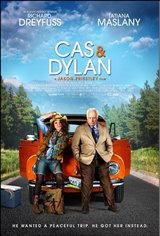 Dr. Cas Pepper (Richard Dreyfuss), a 61-year-old self-proclaimed loner who's terminally ill, reluctantly agrees to give social misfit Dylan Morgan (Tatiana Maslany), 22, a short lift home. The last thing he anticipates is that he will strike her angry boyfriend with his car, find himself on the lam and ultimately drive across the country with an aspiring young writer determined to help him overcome his own bizarre case of suicide note writer’s block.

However, as fate would have it, that is exactly what happens. Suddenly Cas’s solo one-way trip out West isn’t so solo. With Dylan at his side, the two take off on an adventure that will open their eyes to some of life’s lessons – both big and small.