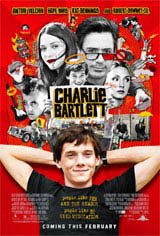 Among classic high school rebels, there have been truants, deliquents, pranksters and con artists--but there has never been anyone quite like Charlie Bartlett (Anton Yelchin). An optimist, a truth-teller and a fearless schemer, when Charlier slyly positions himself as his new school's resident "psychiatrist," dishing out both honest advice and powerful prescriptions, he has no idea the ways in which he will transform his classmates, the school principal and the potential of his own life.