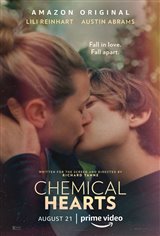 Henry Page (Austin Abrams) is entering his final year of high school and has never had a girlfriend. That may possibly change when he meets Grace (Lili Reinhart), a new student who has just transferred to the school. The two are chosen to co-edit the school’s newspaper together and although Grace has no problem helping with editing and design, she refuses to write, because she says she was once assigned a story about someone who was important to her, but couldn't find the words.

The two grow closer, and Henry wants to know more about Grace and her mysterious past. He learns Grace doesn’t socialize much after a bad car accident nine months earlier, which left her walking with a cane. As Henry finds himself falling for Grace, the two struggle with the relationships, disappointments and loss that come with being a teenager.