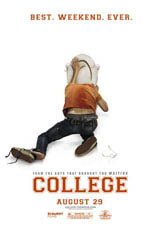 Three high school seniors (Drake Bell, Andrew Caldwell, Kevin Covais) visit a local college campus as prospective freshman anticipating the best weekend of their lives. Once there, the rowdiest fraternity on campus decides to recruit the boys as pledges, subjecting them to endless humiliations, in return for granting them access to the no-holds-barred college party scene.

But once the boys catch the eye of some of the older sorority girls, the threatened Frat-boys increase the pre-frosh humiliation and blackmail them by threatening to expose their age. The boys decide to fight back, retaliating with a major revenge scheme.

What began as the weekend-from-hell turns into the BEST. WEEKEND. EVER.