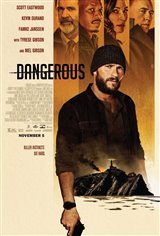 After learning about the death of his younger brother, Dylan Forrester (Scott Eastwood), a reformed sociopath, travels to a remote island to attend his funeral. Dylan's arrival isn't welcomed by his family, as the FBI contacts local law enforcement (Tyrese Gibson) to apprehend Dylan.

After a group of mercenaries show up unannounced, Dylan suspects that they are connected to the death of his brother, forcing him to follow a path of vengeance as he falls back into his old ways.