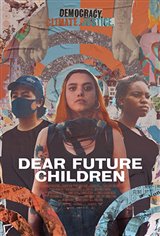 Three young female activists — Pepper in Hong Kong, Rayen in Chile and Hilda in Uganda, cope with the staggering personal impacts of their activism.

Pepper joins pro-democracy protests in Hong Kong that began in 2019 over legislation that surrenders the rights of Hongkongers to China.

Rayen fights a losing battle in a police state. Young activists fight to break the clutches of late dictator Augusto Pinochet through pro-democracy protests in Chile. She worries about the growing gap between the rich and the poor in her country, where everything, including the water supply, is privatized.

Hilda shows the devastating consequences of climate change, including floods that destroyed the village she lived in. Members of her community were killed, and her parents were forced to sell the farm on which they depended for their livelihood. She goes on to give an emotional speech to world leaders at a climate summit.