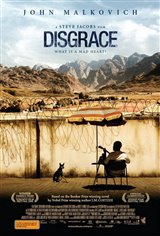 David Lurie (John Malkovich), twice-divorced and dissatisfied with his job as an English professor in post-apartheid South Africa, finds his life falling apart. When he seduces one of his students, and in doing nothing to protect himself from the consequences, he is dismissed from his teaching position, and takes refuge on his daughter's farm in the Eastern Cape. For a time, his daughter's influence and natural rhythms of the farm promise to harmonize his discordant life. But the balance of power in the country is shifting. In the aftermath of a vicious attack on the farm, he is forced to come to terms with more than his disgrace alone.