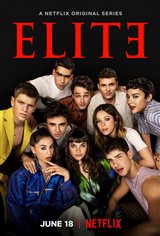 Three teens, who were previously enrolled in public school, are given a scholarship to an exclusive private school. While the working-class teens struggle to fit in, the wealthy students try to handle their own drama at home and at school. The clash between the students finally leads to a student's murder.

In season two, the students are still in shock after the murder of their classmate. Another student goes missing. The cops are still trying to investigate the student's murder and question the suspect who was arrested.

Season three opens with the death of another student. Throughout the show, in flashbacks, we see what really happened that led to the death of their classmates.