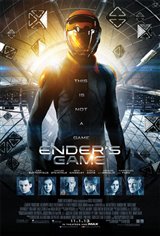 Set in the future, humans on Earth survived attacks from an alien species called Formics 50 years earlier. In order to prepare for any future invasions, gifted children are sent to an advanced military base to be trained to fight.

Ender Wiggin (Asa Butterfield), 12, is a shy but brilliant boy who rises through the ranks, and along the way he meets and makes friends with Petra (Hailee Steinfeld), one of the only girls in Battle School. When his commander (Harrison Ford) decides Ender is ready, he makes him the leader and tasks the boy with heading a team of child soldiers into a war to destroy the Formics.

Based on the celebrated novel by Orson Scott Card.