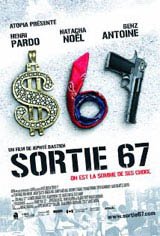 Ronald Paquet (Henri Pardo), a young mulatto, saw his dad murder his mom when he was eight years old. Moved from one foster home to another, Ronald is recruited by a street gang where he dwells in a life of crime and violence.

At first determined to avenge his mother's murder, Ronald finds himself reluctant to take action when his father is finally released from jail.