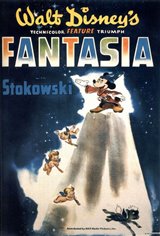 Fantasia, Walt Disney's animated masterpiece of the 1940s, grew from a short-subject cartoon picturization of the Paul Dukas musical piece The Sorcerer's Apprentice. Mickey Mouse was starred in this eight-minute effort, while the orchestra was under the direction of Leopold Stokowski.

Disney and Stokowski eventually decided that the notion of marrying classical music with animation was too good to confine to a mere short subject; thus the notion was expanded into a two-hour feature, incorporating seven musical selections and a bridging narration by music critic Deems Taylor.

The first piece, Bach's Toccata and Fugue in D Minor, was used to underscore a series of abstract images. The next selection, Tschiakovsky's Nutcracker Suite, is performed by dancing wood-sprites, mushrooms, flowers, goldfish, thistles, milkweeds and frost fairies.

The Mickey Mouse version of Sorcerer's Apprentice is next, followed by Stravinsky's Rite of Spring, which serves as leitmotif for the story of the creation of the world, replete with dinosaurs and volcanoes.

After a brief jam session involving the live-action musicians comes Beethoven's Pastorale Symphony, enacted against a Greek-mythology tapestry by centaurs, unicorns, cupids and a besotted Bacchus. Ponchielli's Dance of the Hours is performed by a Corps de Ballet consisting of hippos, ostriches and alligators.

The program comes to a conclusion with a fearsome visualization of Mussorgsky's Night on Bald Mountain, dominated by the black god Tchernobog (referred to in the pencil tests as Yensid, which is guess-what spelled backwards); this study of the sacred and profane segues into a reverent rendition of Schubert's Ave Maria.

Originally, Debussy's Clair de Lune was part of the film, but was cut from the final release print; also cut, due to budgetary considerations, was Disney's intention of issuing an annual update of Fantasia with new musical highlights and animated sequences. A box-office disappointment upon its first release (due partly to Disney's notion of releasing the film in an early stereophonic-sound process which few theatres could accommodate), Fantasia eventually recouped its cost in its many reissues.

For one of the return engagements, the film was retitled Fantasia Will Amaze-ya, while the 1963 reissue saw the film squashed to conform with the Cinemascope aspect ratio. Other re-releases pruned the picture from 120 to 88 minutes, and in 1983, Disney redistributed the film with newly orchestrated music and Tim Matheson replacing Deems Taylor as narrator.

Once and for all, a restored Fantasia was made available to filmgoers in 1990. A sequel, Fantasia 2000, was released in theaters in 1999.