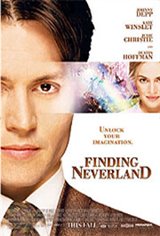 Disappointed by the lukewarm reception his latest play received, Scottish playwright J.M. Barrie (Johnny Depp) is clearly in need of some serious inspiration. Unexpectedly, he finds it one day during his daily walk with his St. Bernard in London's Kensington Gardens, where he encounters the Llewelyn Davies family: four fatherless boys and their beautiful, recently widowed mother (Kate Winslet).

Despite the disapproval of the boys' steely grandmother (Julie Christie) and the resentment of his own wife (Radha Mitchell), Barrie befriends the family, engaging the boys in tricks, disguises, games and sheer mischief, creating play-worlds of castles and kings, cowboys and Indians, pirates and castaways. He transforms hillsides into galleon ships, sticks into mighty swords, kites into enchanted fairies and the Llewelyn Davies boys into "The Lost Boys of Neverland."

From the sheer thrills and adventurousness of childhood will come Barrie's most daring and renowned masterwork, "Peter Pan." Barrie begins rehearsals only to shock his actors with such unprecedented requests as asking to fly across the stage, talking to fairies made of light and don dog and crocodile costumes. Then, just as Barrie is ready to introduce the world to "Peter Pan," a tragic twist of fate will make the writer and those he loves most understand just what it means to really believe.