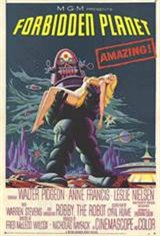 There are many wonders on Altair-4, but none is greater or more deadly than the human mind. "Forbidden Planet" is the granddaddy of tomorrow, a pioneering work whose ideas and style would be reverse-engineered into many cinematic space voyages to come.

Leslie Nielsen portrays the commander who brings his spacecruiser crew to the green-skied Altair-4 world that's home to Dr. Morbius (Walter Pidgeon), his daughter (Anne Francis), the remarkable Robby... and to a mysterious terror.