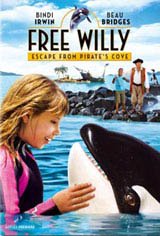 2 votes and 2 Reviews | Write a Review

When 11-year-old Kirra's (Bindi Irwin) father, a widowed zoo veterinarian, is hospitalized for several months she is sent to live with her estranged grandfather, Gus (Beau Bridges), in South Africa. He owns a dilapidated seaside theme park, which is quickly losing its customers to rival park owner Rolf.

Business is given a miraculous boost though when a fierce storm traps a baby orca in Gus' lagoon, making his park the area's main attraction. The growing orca, named Willie, has an inhibited sense of echolocation making his survival in the wild impossible, but Kirra also knows that the orca will outgrow his lagoon very quickly. Gus thinks his only choice is to sell Willie to Rolf's park where he will be captive but safe. With little time left before Rolf claims him, Kirra must find a way for Willie to survive with his pod in the open sea.