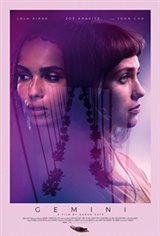 Jill LeBeau (Lola Kirke) works for Hollywood star Heather Anderson (Zoë Kravitz), who confides in her that she doesn't feel safe, saying that there are a lot of crazy people who are mad at her. Heather borrows a gun from Jill, but when Jill goes to Anderson's house in the morning, she stumbles upon a horrific crime scene in which Anderson is dead from a gunshot wound to the head.

Now under suspicion, Jill must convince Detective Edward Ahn (John Cho) of her innocence while trying to find those responsible for Anderson's murder. In the process, Jill struggles with her own flaws and inner demons while attempting to discover the truth.