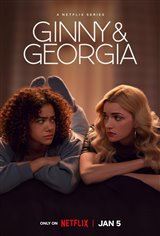 Georgia (Brianne Howey) and her family have been moving homes all their life. Looking for a fresh start, Georgia moves with her daughter, Ginny (Antonia Gentry), and her son, Austin (Diesel La Torraca), to a town in Massachusetts. Georgia believes this will be a great opportunity to settle down and give her kids the normal life she never had.

But their fresh start to a new life is threatened when some of the many secrets from Georgia's past begin to catch up to her and drive a wedge between her and her daughter.

In the second season, Ginny has to find a way to forgive her mother after learning her secrets. Ginny also begins dating Marcus (Felix Mallard), which makes his twin sister Maxine (Sara Waisglass), her best friend from MANG, angry with her. Meanwhile, Georgia meets Paul's (Scott Porter) parents, who don't approve of their engagement, and a private eye hired by her late husband's first wife is trying to find something to pin on Georgia.

Filmed in Toronto, Ontario with a partly Canadian cast and crew.