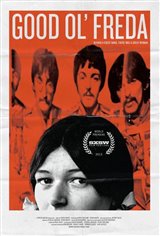 The 1960s saw the prime years of Beatlemania. The world was fascinated by the music of four lads from Liverpool, England: John Lennon, Paul McCartney, George Harrison and Ringo Starr.

While the Fab Four were on the rise to success, Freda Kelly, a shy teenage girl and fellow Liverpool native joined their team as a secretary. She witnessed their rise and success, but never once told her perspective. Decades later, Freda Kelly is now opening up about her experience.