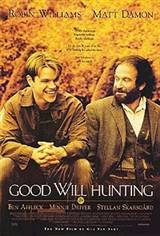 For the first 20 years of his life, Will Hunting (Matt Damon) called the shots. Now, he's hit the wall.

Like all his friends in their rough South Boston neighbourhood, Will does menial jobs between visits to the local bar and run-ins with the law. He's never been to college, except to scrub floors at MIT. Yet he can summon obscure historical references using his photographic memory. While Nobel Prize-winning professors struggle with math problems, Will solves them instantly.

One thing he can't do however, is talk his way out of jail, the result of his latest barroom brawl. His only hope is a college professor (Robin Williams) who has a keen understanding of what it means to fight your way through life.