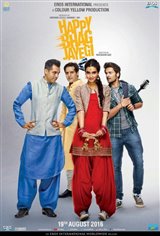 This romantic comedy follows Harpreet "Happy" Kaur (Diana Penty) a fiesty young Indian woman who is being forced against her will to marry a local goon named Bagga (Jimmy Shergill), who her father deems is financially and socially suitable for her. However, Happy is in love with Guddu (Ali Fazal). On the night of her wedding to Bagga, Happy plans to escape and elope with Guddu instead. But an unforeseen error has Happy en route to Pakistan.

Once in Pakistan, Happy meets a politician's son by the name of Bilal Ahmed (Abhay Deol). Bilal has always wanted to be a cricket player, but was never able to fulfill his dream because his father would rather see him follow in his footsteps. When he has a chance meeting with Happy, he figures this is his chance to do something out of the ordinary. So, the two set off on a hilarious journey to get Happy safely back into the arms of her beloved Guddu.