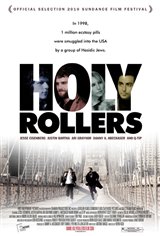 Sam Gold (Jesse Eisenberg), a young Hasid from an Orthodox Brooklyn community reluctantly follows the path his family has chosen for him, awaiting a pending arranged marriage and studying to become a Rabbi. A charming neighbor, Yosef Zimmerman (Justin Bartha), senses Sam's resistance and propositions him to transport 'medicine' for Jackie (Danny A. Abeckaser), an Israeli dealer, and his girlfriend, Rachel (Ari Graynor).

Sam quickly demonstrates his business skill to his bosses, who instantly take Sam under their wing. Now exposed to the exciting and gritty worlds of Manhattan and Amsterdam nightlife, Sam begins to spiral deeper into their detrimental lifestyle, experimenting with ecstasy and then falling for Rachel. As the business grows, Sam's double life begins to rip his family apart and the community becomes suspicious of his illegal activities.

Sam slowly comes to realize the façade behind the easy money and parties. Caught between life as a smuggler and the path back to God, Sam goes on the run, forced to make a fatal decision that could bring the entire operation crashing down.